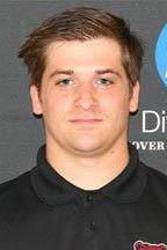 NASHVILLE, Tenn. -- A familiar face will be joining Benilde-St. Margaret's this season at Pat Borer ('09) returns to join the varsity staff.

A member of the Red Knights 2008 Class AA third-place team and a captain in 2008-09, Borer has been coaching and scouting since completing his collegiate playing career and earning his undergraduate from the University of New England in 2015.

Borer spent last season as an assistant coach for SUNY-Potsdam (NCAA Division III), where his responsibilities included assisting with daily practices, working with players one-on-one, and leading the team’s special teams. He was also heavily involved with player recruitment and day-to-day operations for the Bears.

He was tabbed to serve as the head coach of the Nashville Jr. Predators in 2017-18 before the team folded operations.

He has served as a regional scout for teams in the North American Hockey League and also served as an assistant varsity coach for Armstrong/Cooper High School, along with fellow BSM alum Danny Charleston.

Borer has worked for Competitive Edge Hockey and Charleston's Overspeed Hockey Training, and has served as an on-ice and off-ice instructor with both forwards and defensemen in all systems.

"Pat will be a great addition to an already strong staff," head coach Ken Pauly said. "He will help our players continue to move forward as he draws on his own experience as high school, junior, and college hockey player.

"Pat is a true student of the game. What make him such a great addition is that he can draw on his playing experience and his experience as a scout and junior coach as well."