Benilde-St. Margaret's alum T.J. Moore ('13) has signed a contract with SønderjyskE of the Metal Ligaen, the top professional league in Denmark.

The 23-year old netted 163 points (70g, 93a) in 110 games during his high school career, serving as an assistant captain on the Red Knights' 2012 Class AA state championship team. He earned all-conference honors in 2012 in addition to being named honorable mention all-state by the St. Paul Pioneer  Press and Associated Press.

He led the Crusaders in goals during two of his four seasons with the team and finished with 106 points (47g, 59a) in 133 games during his college career. The forward was an alternate captain during both his junior and senior seasons and was named the team's MVP as a sophomore.

After completing his career at Holy Cross in March, Moore signed with Norfolk of the East Coast League, scoring three goals and five points in eight games for the Admirals. 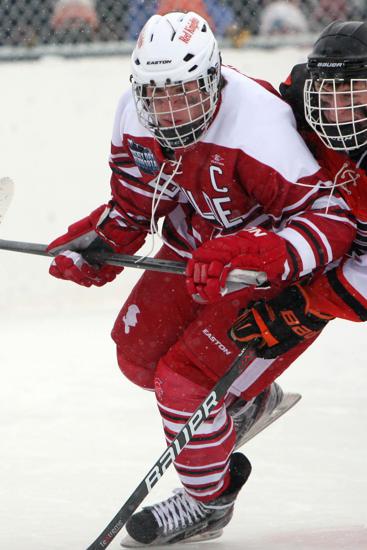 T.J. Moore served as a co-captain for BSM during his senior campaign.