MINNETONKA, Minn. --  Minnetonka and Benilde-St. Margaret's combined for seven second-period goals but it was the Skippers scoring four of those goals, giving them the winning margin in a 5-4 junior varsity victory.

Following a scoreless first period, the teams traded goals in the first two minutes, 18 seconds of the second period, scoring the goals 38 seconds apart with Will Thompson responding to Minnetonka's first goal.

The Skippers would scored twice within a 21-second span later in the period but Jonny Woodford's power-play goal came 60 seconds after the Skippers took the 3-1 lead. 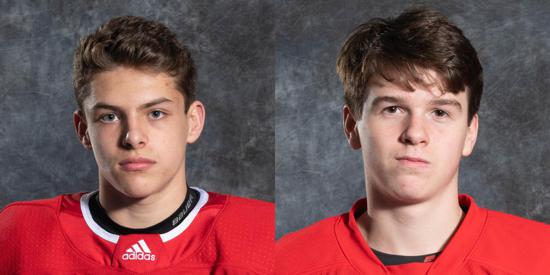 Asher Connolly (left) and Nik Dokman each had a pair of assists.

The period finished at a furious pace as Minnetonka restored the two-goal lead just 33 seconds after Woodford's goal but Logan Lyke, with 1:18 to play, once again made it a one-goal game entering the final period, finishing a span of 3:23 which saw five goals scored.

Minnetonka again took a two-goal lead, 5:35 into the final period and it took nearly 10 minutes for the Red Knights to respond, with Thompson scoring his second goal with 1:35 to play.

BSM then called timeout and pulled goalie Jack Olson for an extra attacker but were unable to get the equalizer.

Olson finished the game with 34 saves, stopping all 17 shots he faced in the opening period, when the Red Knights were out-shot 17-2.

Next up for BSM is a return to the St. Louis Park Recreation Center, Saturday, when they will host Hill-Murray at 5 p.m.