ST LOUIS PARK, Minn. -- Holy Angels may have done what it was trying to do, in hold Benilde-St. Maragarets' top line without a goal but the Red Knights' other three lines combined for five goals and they got two from the blue line in advancing to the Section 6AA semifinals with a 7-1 win over Holy Angels.

The two teams met on Jan. 26 and, like the game, which also finished in a 7-1 BSM win, it was the Stars who got on the scoreboard first when Caeden Phelps came down the slot, after the initial Holy Angels rush, and slammed home a Noah Griswold rebound just four minutes, one second into the game.

It took BSM less than four minutes to get the equalizer as Charlie Bishop carried the pucks into Stars' zone on the right side. His cross-ice pass found Cooper Gay's stick and the big Red Knight junior put away his ninth goal of the season.

From there, BSM got on a goal, as Tristand Sarsland got the puck near his own blue line, weaved through the neutral zone and scored by driving the net from the left wing and jamming the puck home.

Bischel then made it a 3-0 game with 3:10 remaining in the opening frame as he tipped a Jonah Mortenson shot from the left-wing boards.

Nate Schweitzer became the first BSM blueliner in seven years to reach the 15-goal mark when he took a pass from James Callahan in the first circle and blasted a shot past Holy Angels goalie Matthew Syverson.

Just 41 seconds later, Bischel redirected a shot from the right point by Sarsland and Will Thompson snuck in the back side all alone and he put a backhanded just inside the left post before Syverson could slide across to make the save. 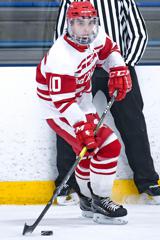 Charlie Warnert capped off the night with his fifth and sixth goals of the season. 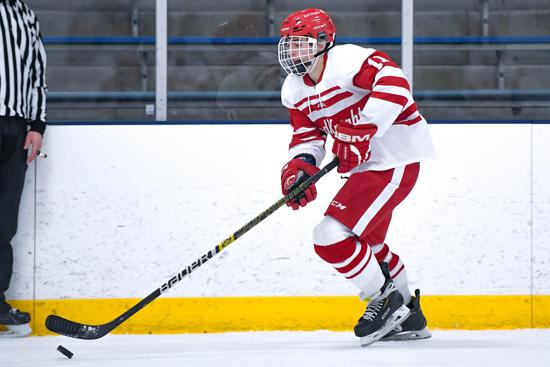 Charlie Bischel put up a three-point night with a goal and two assists.

It only took 85 more seconds for BSM to extend the lead to five goals when Jett Johnson made a nifty backhand pass to Charlie Warnert as he built speed entering the Starts' zone, Warnert drove to net and used a Holy Angels defenseman as a screen to send the game into the second intermission with the hosts holding a 6-1 lead.

The score remained that way deep into the final period until Brady Yakesh intercepted a pass in the neutral. He moved the puck up to Jackson Bisson, who entered the zone on the right side, passed the puck through the slot to Warner and the junior winger buried his sixth goal of the season to send the game into running time.

Despite the offensive outburst, the Red Knights got a stellar performance from Carson Limesand, who turned aside 20 of 21 shots while also collecting his second assist of the season as BSM held a 34-21 advantage in shots on goal.

The win sends the second-seeded Red Knights into Saturday's quarterfinal where they will meet Wayzata in a 12 p.m. semifinal game at Bloomington Ice Garden.