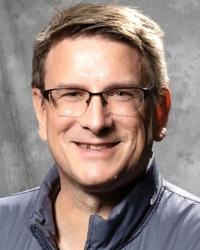 Entering his 28th season at Benilde-St. Margaret’s and 31st season as a head coach, in 2020-21 is Ken Pauly, who is in his second stint behind the Red Knight bench.

The 2012 Mariucci Award winner, as the state’s Class AA coach of the year, Pauly has 32 years of high school hockey coaching under his belt, including 29 seasons at BSM.

Pauly was the Red Knights' head coach for 14 years before taking over at Minnetonka in 2004. He stayed on with the Skippers for three seasons before returning to BSM for the 2007-08 season.

A Red Knight assistant coach for three years, Pauly took over the reins of the Red Knights in 1990 and began building one of the elite programs in the state, leading the team to Class A state titles in 1999 and 2001.

Upon returning to BSM, he took the team to its first Class AA state tournament, claiming third-place honors in 2008, and won the program's first AA title in 2012.

During his 27 years as the Red Knights' bench boss, Pauly has amassed three state titles, 14 conference championships and has compiled a 466-225-27 record, making him the winningest coach in the program's 61-year history.

From 2004 to 2007 he was the head coach at Minnetonka, where his Skippers won the 2006 Classic Lake Conference title and advanced to Class AA state tournament for just the second time in the school's history, and its fourth state tournament appearance overall, claiming the consolation title.

He was named the Section 6AA coach of the year for his efforts and was also named Minnetonka High School’s 2006 Coach of the Year.

In his 30 years as a head coach, Pauly has put together a 510-256-34 record. He ranks 14th in career victories among Minnesota coaches and fourth among active coaches. He passed Gene Sack, who coached the first Benilde hockey team in 1958-59, during the 2015-16 campaign on the state's all-time wins list.

He won his 400th career game as the Red Knights' head coach when Peter Heimbold scored with three minutes, 22 seconds to play in regulation and Cade Gleekel scored with 24 seconds remaining in overtime to give BSM a 2-1 win at 16th-ranked Farmington.

On Jan. 16, 2020, Pauly became the 14th coach in state history to record 500 career victories when the Red Knights posted a 6-3 win at Bloomington Jefferson.

Pauly has also worked with USA hockey's development program, where he served on the Regional 16- and 17-year-old staffs at the Olympic Training Centers in Marquette, Mich., St. Cloud, Minn., and Lake Placid, N.Y.

In 2009, Pauly won his second Minnesota Wild 3M Excellence in Coaching Award, an honor he also received in 2007 while coaching Minnetonka.

A lifetime member of the Minnesota Hockey Coaches Association, he served over 10 years on the MHCA's Executive Board; three of those as President. Coach Pauly currently sits on the Herb Brooks Foundation's Board of Directors.

Pauly teaches full time in BSM’s social studies department and serves as chair of that department. An award winning teacher, he earned the school’s Faculty of the Year Award in 2012 and the Red Knight Leadership Award in 2015. He was chosen as BSM's commencement speaker in 1997 and in 2018, he received his 20 Years of Service honor as a faculty member.

Pauly earned a bachelor of art's degree in history from the University of Minnesota in 1989. He and his wife, Anne Marie Dominguez, an English teacher at BSM, reside in Plymouth. They have two children; Caroline, 20, who attends the University of Wisconsin, and A.J., 17, a junior who plays for the BSM hockey program.