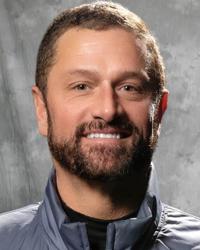 John Russo returns for his 14th season at BSM, where he coaches the Red Knights' defense and is in charge of the team's penalty-killing unit. He came to BSM in 2007 after filling a similar role on Ken Pauly's staff at Minnetonka.

Last season, the Red Knights were 78 for 89 on the penalty kill, an .876 mark which was its best penalty-killing effort in Russo's 13 seasons.

In 25 years as a high school coach, Russo is recognized as one of the top assistant coaches in high school hockey. He has been a member of five state tournament coaching staffs and has earned three Section Assistant Coach of the Year awards (2008, 2012, 2018) at BSM, for a total of five career awards.

He has served as a head coach in the highly-regarded Upper Midwest High School Elite League and has been a part of the coaching staffs at Blake School, Orono High School and Minnetonka High School, along with three seasons as an assistant coach at Gustavus Adolphus College.

In 2015 he was named the chairman of the Hobey Baker Committee, tasked with choosing college hockey's top player, and remains as a member of the board of directors.

Russo is an attorney who resides in Plymouth with his wife and family.