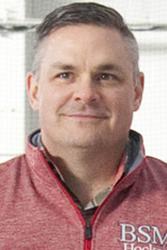 Chris Gernentz returns for his fourth season with the Red Knights, where he will serve as the goalie coach as well as managing the program's social media platforms.

Gernentz has over 20 years of youth hockey player and goalie coaching experience.

Most recently, Gernentz served as the assistant peewee A coach in Edina prior to joining BSM for the 2016-17 season. He has also coached youth and high school goalies in Red Wing, Eagan, and Rosemount before moving to Edina.

Gernentz was a three-sport athlete during his prep career, competing in hockey, football and golf.

You may also see him with a camera in his hands as he has shot BSM sports for six years.

Chris was raised in Red Wing and currently resides in Edina with his wife, Tracy. They have two children; Jalen, a former Red Knight goalie, and Kailey. He is employed with Wells Fargo, as a manager in the global Risk Management group.