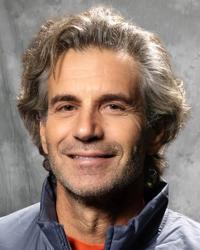 In his third season with the Red Knight boys' program, Gino Peluso joins the varsity coaching staff as an assistant coach, where he will work with the forwards and power-play units, after serving the last two seasons as a JV assistant.

Prior to joining coach boys' staff for the 2017-18 season, Peluso had served as an assistant girls' varsity coach for BSM since 2012. He helped guide the 2013-14 team to the Section 6AA title and a runner-up finish in the Class AA state hockey tournament.

Peluso has been coaching hockey for 17 years at the youth and high school levels. Prior to joining the BSM staff he was assistant girls varsity coach at Eden Prairie High School from 2009-2011.

He graduated from Greenway High School in Coleraine, Minn., and played hockey for the University of Minnesota, obtaining a bachelor's degree in legal studies.

He currently lives in St. Louis Park and has two daughters, Alison (25) and Grace (20), a former Red Knight, who is currently playing hockey at the College of the Holy Cross.