PLYMOUTH, Minn. -- Mitchell Dokman scored his third goal in two games and Charlie Frattalone topped the 30-save mark for the third time in three starts as the Benilde-St. Margaret's junior varsity skated to a 1-1 tie at Wayzata.

Dokman's fourth goal of the season came just three minutes, 12 seconds, into the game and stood as the game's lone tally until Nick Argento scored for the Trojans on the power play with 4:03 remaining in the second period.

In all, Wayzata had a 34-18 advantage in shots on goal for the game as Frattlone made 33 saves, raising his save percentage to .935 on the season while lowering his goals against average to 2.13.

Next up for BSM is a return home, Saturday, for a 12 noon game at the St. Louis Park Recreation Center versus Cretin-Derham Hall. 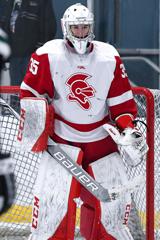 Charlie Frattalone has topped the 30-save mark in all three of his starts this season.