Cretin-Derham Hall pulls away from BSM for three-goal win.

ST. LOUIS PARK, Minn. -- Cretin-Derham Hall scored goals in each of the first two periods and, after seeing its lead cut in half in the opening minute of the third period, added two more goals to pull away from Benilde-St. Margaret's for a 4-1 junior varsity win.

The Raiders, after scoring single goals in both the first and second periods, carried a 2-0 lead into the final frame before Mitchell Dokman scored his fourth goal in three games, just 26 seconds into the period.

CDH put the clamps on the Red Knights thereafter, allowing just three shots in the periods and, after outshooting their hosts in all three period, the Raiders had a 35-22 advantage in shots on goal.

Jack Olson made his second JV start of the season and stopped 31 of the 35 shots he faced.

BSM is now idle until after Christmas, when it will open the Tradition at the Park with a 10 a.m. game, Thursday, versus Holy Family. The Red Knights will take on Lakeville South, Friday, at 10 a.m. before closing out play in the event with an 8 a.m. game, Saturday, versus Minnetonka. 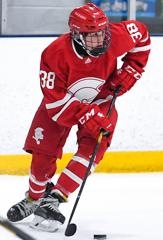 Mitchell Dokman has scored in three consecutive games after providing BSM with its lone goal.