Red Knight junior varsity unbeaten at Tradition at the Park

ST. LOUIS PARK, Minn. -- The Benilde-St. Margaret's junior varsity skated to a 4-4 tie, Thursday, with Holy Family and a 5-2 victory over Lakeville South in the Tradition at the Park.

Thursday's tie was decided by a shooting, in which the Red Knights won 2-1 in five rounds.

Saturday's schedule game with Minnetonka was cancelled due to the Skippers' team bus being involved in an accident and the team was unable to arrive at the St. Louis Park Recreation Center.

After taking a 2-0 first-period lead, the Red Knight JV had to come from behind to earn a 4-4 tie and a win for the tournament with a 2-1 shootout win.

Dokman scored his second goal of the game just 40 seconds into the final period but goals 1:01 apart by Holy Family, including Mark Rahn's second of the game, gave the Fire their first lead of the game.

However, Gatti scored 48 seconds later and the teams went into overtime tied 4-4 and, after an eight-minute extra session, in which the teams combined for 14 shots on goal, the game headed to a shootout.

Neither team scored in the first three rounds but Ryder Ferguson gave Holy Family a lead by scoring in the fourth round.

Aiden Wahlstrom answered with BSM's first goal of the shootout and, after a miss by the Fire, Gatti scored to end the shootout.

The Red Knights had a 41-26 advantage in shots on goal with Sam Schumacher earning the decision for BSM with 22 saves. 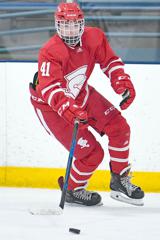 Gino Gatti scored the game-tying goal and added the winning goal in the shootout. 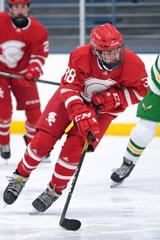 A.J. Pauly got Benilde-St. Margaret's off to a fast start and three second-period goals gave the Red Knights a four-goal lead as they cruised to a 5-2 win over Lakeville South.

After Pauly's goal, four minutes, 46 seconds into the game, it took BSM over 17 minutes to get on the scoreboard again at Mitchell Dokman scored his third goal of the tournament at 7:06 of the middle stanza.

Ryan Gearen and Quinn Schliesman, who scored on the power play after missing Thursday's game, made it 4-0 heading into the second intermission.

Dokman's second goal of the game, his team-leading ninth in 10 games this season, made it 5-0 just 38 seconds into the final period before a pair of late goals by the Cougars finished the scoring.

Backstopping the win was Jack Olson, who stopped 24 of 26 shots as the Red Knights enjoyed a 40-26 advantage in shots on goal.

The Red Knights are idle for a week before returning to action by travelling northwest on I-94 to face Moorhead in a 2:30 p.m. matinee at the Moorhead Sports Center.