MOORHEAD, Minn. -- Carter Johnson stole a puck at his own blue line, raced the length of the ice and scored his eighth goal of the season with 28.8 seconds to play in the game, giving No. 6 Moorhead its only lead of the game and a 3-2 win over No. 15 Benilde-St. Margaret's.

The Red Knights had led twice in the game, first on a Charlie Warnert goal with 5:04 to play in the first period.

The play started in BSM's own zone with a faceoff win by Grant Ellings. Warnert got the puck and raced up the left side, getting off a shot that was blocked but landed on the stick of Adam Marshall, who quickly fed Warnert for a second chance, which he buried from the left side of the Spuds' goal.

Moorhead answered back with just 18.5 seconds remaining in the opening session as Cllen Gess buried a Max Dronen rebound for his team-leading 11th goal of the season.

The teams skated through a scoreless second period, in which Carson Limesand record 13 saves for BSM and Hudson Hodges made 12 saves for Moorhead, before Jonah Mortenson scored at 2:12 of the final period.

On a line rush, Cooper Gay took a pass near the red line and skated the puck to the top of the left circle in the Spuds' zone. He then dropped a pass for Jackson Bisson who, in turn slid the puck to Mortenson, who broke free from his backchecker and tipped the puck past Hodges from the edge of the crease. 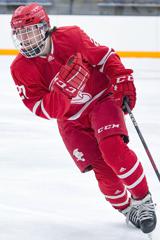 Jonah Mortenson gave BSM its second lead of the game, early in the third period. 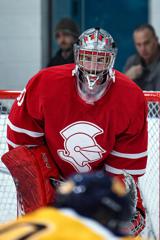 Carson Limesand kept the Red Knights in the game, stopping 24 of the first 25 shots he faced.

The Red Knights held onto that led for six minutes before Carson Triggs stole the puck in the neutral, circled back into the Red Knight zone on the left side and passed to Luke Gramer in the slot.

Gramer's one-time shot from the top of the slot was stopped by Limesand but Gramer followed up and flipped his own rebound over a prone Limesand to tie the game.

With the game appearing as if it would go to overtime, with the score tied at 2-2 and shots on goal tied at 30-30, Johnson knocked down a dump in on the right side near his own blue.

He burst up the right-wing boards before making a beeline for the BSM goal was in the offensive zone. He found room between Limesand's pad and slid the puck through the five-hole to give his team the only lead it would need.

The Spuds then did not allow the Red Knights a clean entry into the attacking zone so they were unable to pull Limesand for an extra attacker and Moorhead had its 11th win of the season.

Limesand finished with 28 saves for BSM while Hodges also stopped 28 shots for the hosts in winning his 10th game of the season.

Up next for the Red Knights is a meeting with 10th-ranked Hill-Murray, Tuesday. Game time is slated for 7 p.m. at Aldrich Arena in Maplewood.