MAPLEWOOD, Minn. -- Carson Limesand was at his best, stopping all 32 shots he faced, while No. 16 Benilde-St. Margaret's scored on the power play, went 4-for-4 on the penalty kill, handing No. 8 Hill-Murray a 2-0 loss on the Pioneers' home ice.

The Red Knights controlled much of the first period, out-shooting their hosts, 11-6, while getting a pair of power-play chances without allowing one.

The first power-play results in BSM taking the lead when Nate Schweitzer walked off the left-wing boards with the puck and used traffic in front of the net to pick the upper-left corner, beating a screened Remington Keopple six minutes, 48 seconds into the game.

The Pioneers would control much of the play over the final two periods, out-shooting BSM, 26-18, while getting four power-play opportunities to just two for their guests.

Limesand was at his best as the game wore on. However, he got some more offensive help just 3:36 into the final period.

Cooper Gay lost a defensive zone faceoff but raced out to the right point to block a shot. When the puck deflected off of him and into the neutral, he took off, picking up the puck and carrying it into the Hill-Murray zone.

He cut towards the net from the left circle to get Keopple moving across his crease before snapping off a shot on the short side that the goalie could not get back to stop. 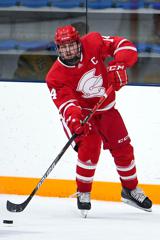 Nate Schweitzer's first-period power-play goal proved to be the only offense the Red Knights would need in the 2-0 win. 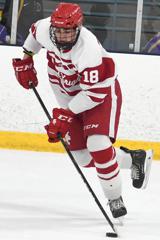 Limesand would prove to be the team's best penalty killer, stopping all seven power-play shots which Hill-Murray generated, which included the game's final 1:20 when the Pioneers pulled Keopple for an extra attacker.

After back-to-back 13-save periods, Limesand finished the game with 32 saves. The shutout is his third of the season, marking the third consecutive season in which he has reached that mark and, with 11 career saves, he ranks second on BSM's all-time list.

The Red Knights now have a week off before returning to action. They will begin Metro West Conference play next Thursday when they take on Bloomington Jefferson in a 7 p.m. game at the Bloomington Ice Garden.