The win was a key one for BSM as the Red Knights eye Section 6AA playoffs in just over a month, giving them a 2-1-1 record versus section competition with one more game against a section opponent in their final eight games.

Ellings opened the scoring with two minutes, 47 seconds remaining in the first period when he took a cross-ice pass from Brady Yakesh as he crossed the Bears' blueline. He then beat Aksel Reid with a shot from the left circle to end a 13-game goal-scoring drought, the longest of his varsity career.

That lead held up until 4:15 remained in the second period when William Matzke notched his ninth goal of the season.

The ensuing faceoff was won by Blake Mesenburg to Logan Lyke. He immediately made a pass across the blue to his partner, Yakesh, on the right side.

Yakesh then made a tape-to-tape diagonal pass through the neutral, finding Gay at the Blake blueline and the Red Knight senior, with a penchant for scoring key goals, did it again as he best Reid with a shot from the left circle.

From that point, Limesand took over. He stopped all 13 of the Bears' shots in the final period to finish with 31 saves, his third 30-save performance in his last four games.

The Red Knights will play their fourth game in eight days when they return to action, Thursday, hosting Metro West Conference foe Chanhassen in a game scheduled for a 7 p.m. start. 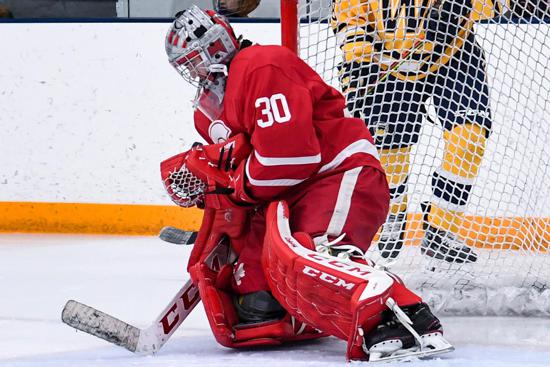 Carson Limesand stopped 31 of 32 shots to earn his seventh win of the season.