Balance continues to be key as BSM downs St. Michael-Albertville

The Knights, hovering on the edge of the state's top-20 rankings, were looking for a win over a ranked team to push themselves into the top 20 but fell behind just four minutes, 14 seconds, into the game when Gay's drop pass to Charlie Warnert allowed the senior right wing to blast a shot from the top of the slot past STMA goalie Aaron Loch.

Adam Marshall's 15th-goal of the season would send the game into the first intermission with the visitors holding a 2-0 lead after out-shooting their hosts, 10-2, in the opening 17 minutes.

The Knights opened the scoring in the second period on the first of Luc Laylin's two goals but Gay responded, scoring back-to-back goals to make it a 4-1 game after two periods.

STMA played with urgency in the final period, out-shooting BSM, 15-12, but the Knights could never close the gap.

A turnover in the right corner led to Bischel finding himself alone in front of the STMA net and he scored just 2:33 into the final period.

Laylin's second goal made the score 5-2 but then Bischel set up Jonah Mortenson with 7:33 to play and then scored his second goal three minutes later to finish up the scoring. 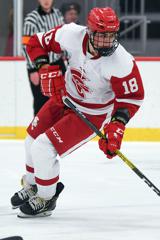 Cooper Gay added two goals and three points to his team-leading totals of 16 goals and 28 points.

Mesenburg, who assisted on Warnert's game-opening goal, as well as both of Gay's goals, also played a key role by winning 19 of 29 faceoffs as the Red Knights won 47 of 76 draws.

Lost in the offensive outburst was the play of goalie Carson Limesand. He stopped 24 of 26 shots, including 14 of 15 in the final period.

The Red Knights will battle for first place in the Metro West Conference when they return to action, Thursday, for a 7 p.m. game versus Chaska at the Chaska Community Center.