BLOOMINGTON, Minn. -- Ryan Gearen recorded his second hat trick of the season, which included his eighth short-handed goal of the season, and Mitchell Dokman had four assists, including helpers on all of Gearen's goals, as the Benilde-St. Margaret's junior varsity closed out the 2019-20 season with a 10-0 rout of Bloomington Kennedy.

The Red Knights would go onto out-shoot the Eagles, 61-2, but took some time to get get rolling.

A.J. Pauly finally got BSM on the scoreboard, nine minutes, 31 seconds, into the opening period and Bjorn Lervick added a second goal just over two minutes later, but, despite holding a 24-1 advantage in shots in the opening 15 minutes, the Red Knights went into the first intermission with just a 2-0 lead.

That all changed during a six-goal second period, which saw four goals scored in a span of 2:08.

Gearen got the first two of those four goals, scoring them 22 seconds apart.

Gino Gatti then scored back-to-back goals 34 seconds apart before Gearen completed his hat trick with a short-handed goal with 4:06 to play in the middle frame.

Lervick, who had not scored in 23 previous games this season, scored his second goal of the game before the second period was out to send BSM into the second intermission with an 8-0 lead. 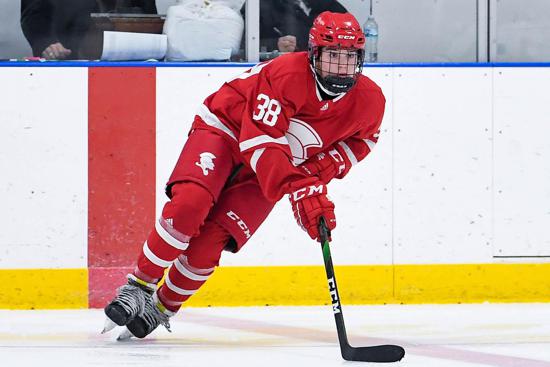 With running time in effect for the third period, the Red Knights scored just twice, getting goals from Ben Thompson and Quinn Schliesman to close out the 10-goal win.

Sam Schumacher received credit for the win, lowering his season goals against average to 1.90 with his third shutout of the campaign.

BSM concludes its season with a 15-6-3 record, including a 6-1-0 record in the Metro West Conference.