Goalie for BSM's first state championship team to work with the Devils. 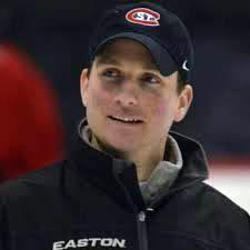 Dave Rogalski, who backstopped Benilde-St. Margarets' first state championship team in 1999, has been named the goalie coach for the NHL's New Jersey Devils.

During the Red Knights' first championship run, Rogalski posted a 14-1-0 record with a 1.39 goals against average and .901 save percentage, along with four shutouts.

In recent years, he was worked with BSM student-athletes with their off-ice training.

A native of St. Louis Park, Rogalski, 39, played college hockey for Division III St. Mary’s University from 2001-03 before beginning his coaching career in 2010 as a the goalie coach for St. Cloud State.

After six seasons of coaching college hockey, he jumped to goaltender consultant for USHL’s Sioux Falls in 2016 before being hired by the St. Louis Blues in 2017, as the organizations goaltending development coach, and has spent the last three seasons there, including the team's run to the 2019 Stanley Cup.

Rogalski played a major role in the development of Blues goalie Jordan Binnington, who started every game of the 2019 Stanley Cup playoffs for St. Louis.

“Rogalski’s been pretty key for me because he really still believed in me the last couple years, when not many people around here did,” Binnington told the St. Louis Post-Dispatch in April 2019. “He really just stayed with me.”

Amanda Stein of NewJerseyDevils.com wrote in her Three Things, presented by Wawa:

Get to know Rogalski in our Three Things, presented by Wawa.

Building the right type of culture has always been of priority for General Manager Tom Fitzgerald and his staff, a culture that includes a feeling of family and responsibility towards one another. Rogalski understands it and was revealed through a 2016 NHL.com article.

When goaltender Zane McIntyre, then playing for the Boston Bruins, was set to make his first NHL start Rogalski made the last-minute trip from Minnesota to New York. On a single day's notice. He found himself a $300 a night hotel in New York on short notice, just to be there for his long-time student.

Rogalski had long worked with McIntyre and wanted to be there for the moment. In fact, McIntyre once lived with Rogalski and his family during the summers when he chose to work with Rogalski in the off-season in Minneapolis.

If this is any indication of character, this is the type of person you want coaching and rooting for your players. He cares about his players and goes above and beyond for them. A perfect culture fit.

Rogalski may not be a household name to NHL fans, but he has an important connection to the Devils franchise, even before signing on as the team's goaltending coach. He has worked the past three seasons as the goaltending development coach with the St. Louis Blues. There Rogalski crossed paths with Martin Brodeur, who was working with the franchise's front office from 2014 to 2018.

Brodeur was a big part of the goaltending coach search, along with Devils Goaltending Development Coach Scott Clemmensen, and a stamp of approval from Brodeur is probably all you need to know about Rogalski.

The Minnesota native, while with the Blues, worked with goaltender Jordan Binnington and is regarded as a positive influence on Binnington's success late in the 2018-19 season, and his run to the Stanley Cup Championship with the Blues.

Whether it was film breakdown, training responsibilities, and all aspects of goalie skill development, Rogalski was called upon by the Blues. His role didn't end there, but he was responsible for scouting goaltenders for the NHL Draft, as a trusted eye and opinion.

Want a glimpse of what it might be like if you were a goaltender coached by Rogalski?

In 2016, the 39-year-old shared some of his drills and coaching philosophies in the online community aptly named "Goalie Coaches". Through videos on YouTube and Instagram, Rogalski was part of a long list of goaltending coaches at all different levels of hockey who have participated.

Appearing in several videos, Rogalski takes goaltenders through different drills and explains his goaltending philosophies for all to see and benefit from.