However, it resulted in the Red Knights' third consecutive Section 6AA championship game loss as they fell to Wayzata, 3-2, in their bid to reach next week's Class AA state tournament for the first time since 2012.

The Trojans jumped on BSM early when Kohl Sauer scored the first of his two goals just one minute, 57 seconds into the game.

It was a late goal in the opening period that hurt the Red Knights as Jake Schneider scored with 58.8 seconds showing on the scoreboard.

The score would remain that way for nearly 20 minutes before Sauer's second goal, at 1:20 of the third period, gave the Trojans what appeared to be a commanding lead.

Tristan Sarsland would finally get BSM on the scoreboard and breathe some life in to his team when he took a cross-ice pass from Ben Thompson in his own zone.

From there, Sarsland raced up the left side, stick-handled past a couple of Trojans defenders, cut to the middle from the left faceoff circle and tucked the puck underneath goalie Will Ingemann for his 12th goal of the season.

Although Wayzata held a 16-7 advantage in shots on goal in the final 17 minutes, the Red Knights had some quality opportunities and, with 2:44 remaining, pulled within a goal. 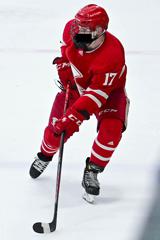 Grant Ellings' goal with 2:44 to play got the Red Knights within a goal of the lead.

Ben Thompson's shot from the right point was kicked out by Ingemann to Jonah Mortenson in the right circle. He then threw the puck towards the net where Grant Ellings, with one knee on the ice, redirected into the back of the net to tighten the game up heading into the final minutes.

BSM would have the game's final six shot attempts after that goal but Wayzata managed to block four of those shots to help Ingemann earn the win.

After recording back-to-back shutouts to open the Section 6AA playoffs, Red Knight goalie Carson Limesand turned in another quality start, stopping 37 of the 40 shots he faced as the Trojans held a 40-24 advantage in shots on goal for the game.

Both teams were assessed just one penalty with BSM's with Mortenson recording the only power-play shot for either team.

In a shortened season due to Covid-19, the Red Knights finished with 15 wins, a mark they've reached 12 times in Ken Pauly's 14 seasons since returning behind the BSM bench in 2007-08.