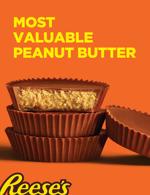 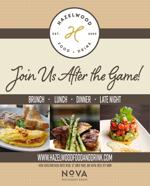 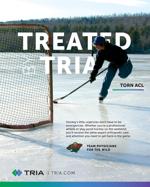 MAPLEWOOD, Minn. -- Michael Risteau snapped a 3-3 tie with 53 seconds to play and Drew Stewart sealed the game with his second goal of the night 16 seconds later as eighth-ranked Benilde-St. Margaret's claimed a 5-3 win at fourth-ranked Hill-Murray.

The Red Knights came out with a pair of first-period goals to take a 2-0 lead into the first intermission as Stewart opened the game at 5:15 and Ben Norris, making his varsity debut, tallied with 2:43 to play in the opening period.

The teams then traded goals in the second period with Marcus Kaufman cutting the lead in half for the Pioneers at 6:21 before Brady Yakesh restored the two-goal lead with seven seconds remaining in the frame.

After falling behind, 3-1, and trailing 21-13 in shots on goal through 34 minutes, Hill-Murray dialed up the pressure, getting a power-play goal from Leo Gruba just 1:45 into the final Stanza and, with 7:47 to play, Ben Karr tied the game for the hosts.

The game came down to the final minute before Risteau scored with 53 seconds to play and the Pioneers, unable to pull their goalie for an extra attacker, saw Stewart collect his fourth point of the night by scoring with 37 seconds to play.

"I really liked the grit and character our guys showed in winning when the game got tight," Red Knight head coach Ken Pauly said. "I thought we carried the play, 5-on-5. Penalties put them back in the game and almost buried us."

Still, Pauly was pleased with his team's play. 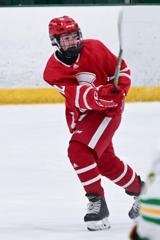 Drew Stewart opened the season with a career-high four-point night. 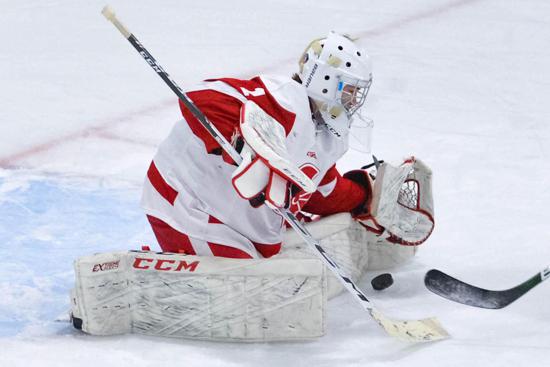 Brennan Chapman stopped 25 shots in his varsity debut to earn the victory.

"For this early, I was pleased with the pace and passing," he said. "The kids did a great job with that."

Despite Hill-Murray coming back to hold a 15-11 advantage in shots on goal in the third period, BSM had a 32-28 advantage for the game.

Brennan Chapman, in his varsity debut, turned aside 25 of 28 shots to earn the victory.

The Red Knights are at the St. Louis Park Rec Center for a pair of games in the Champions' Cup this weekend.