ST. LOUIS PARK, Minn -- Stillwater scored the only goal of the first period but Mason McElroy would shut the Ponies out over the game's final 44 minutes and Brendan McMorrow eventually snapped a 1-1 tie with 7:15 to play in the game to give Benilde-St. Margaret's a 2-1 victory.

A recently revamped first line for the Red Knights saw McMorrow move from right wing to center, Mitchell Dokman move up to the top line and Adam Marshall continue anchor the first line from the left wing.

The line helped account for both of BSM's goals with McMorrow and Dokman setting up Ben Thompson's first goal of the season, which came with with 48.1 seconds to play in the second period.

Dokman dug the puck out of the left corner and moved the puck to McMorrow behind the Ponies' net. From there, McMorrow stepped out to the side of the net, passed the puck to Thompson at the right point and his blast from just inside the blue line found its way past Stillwater goalie Tomas Anderson.

It was Anderson's play that kept his team in the game as the Red Knights dominated the final two periods, out-shooting Stillwater, 31-11, over the final 34 minutes.

It wasn't until late in final period when the Red Knights got on the scoreboard again. 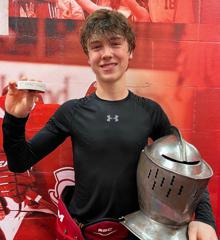 Brendan McMorrow scored his first career goal, added an assist and was named BSM's player of the game.

The play started with Adam Marshall carrying the puck up the left side before hitting the Stillwater blue line and cutting towards the middle of the ice.

Dokman then split two defensemen and Marshall flip him a backhand pass. Dokman's shot was saved by Anderson but McMorrow rushed in as a trailer and knocked home the game winner.

BSM enjoyed a 45-23 advantage in shots on goal for the game with McElroy stopping 21 shots for his fifth consecutive victory.

The Red Knights get eight days off before returning to action next Saturday, when they will be at Braemar Arena to face second-ranked Edina in an 8 p.m. game.