Collins led Hamline with two goals and three assists for five points in a week that included an 8-3 loss to Saint John's on February 7, a 4-2 victory over UW-Stout on February 9, and a weekend series against Gustavus Adolphus on February 11-12 that consisted of 4-4, and 5-5 ties.

The Shakopee, Minn., native tallied a pair of goals on just three shots in a 4-4 tie against Gustavus on February 11.

Collins is tied for second on the team in scoring with five goals and seven assists for 12 points over 21 games played.

Playing two full seasons of varsity hockey for the Red Knights, Collins registered 31 goals and 50 points in 47 games, including team-best 19 goals and 32 points in 25 games during his senior campaign. 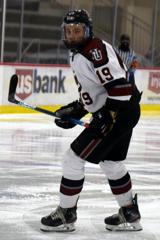 Joe Collins has scored eight goals and 17 points in 27 career games for the Pipers.