Red Knight co-captain to become a member of the Fighting Irish.

Benilde-St. Margaret's boys' hockey co-captain and junior-to-be, Drew Stewart, has announced his commitment to attend the University of Notre Dame and play hockey for the Fighting Irish.

During an abbreviated freshman campaign, due to the Covid pandemic, Stewart recorded six goals and 14 points in 16 games.

A first-team All-Metro West Conference selection this past season, he racked up 15 goals and 38 points in 25 games.

A top-six forward who centered both of the team's top two lines during his sophomore campaign, he proved to be a valuable asset as he won 357 of 559 (.639) faceoffs, led the team in power-play assists (9) and was second in power-play points (10).

He will become the second Red Knight to play for Notre Dame, following in the footsteps of goalie Ryan Bischel, who will be a senior for the Fighting Irish this season. 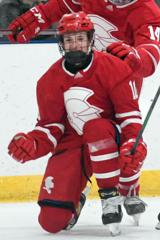 Drew Stewart has 21 goals and 52 points in 41 games through his first two seasons at a Red Knight.