Benilde-St. Margaret's junior forward Michael Risteau has made a verbal commitment to play hockey hockey for the Western Michigan Broncos of the National Collegiate Hockey Conference.

Last season, Risteau was second on the team with 15 goals and a shooting percentage of .190. He tallied 29 points while playing in all 28 games during the 2021-22 campaign. He earned honorable mention All-Metro West Conference honors.

Risteau is the younger brother of Zach Risteau ('16), who recorded a 50-point season as a senior and holds the school record for career shooting percentage (.225).

He will be joining a Western Michigan program that finished the 2021-22 season ranked sixth nationally while earning the number one seed in the Worcester Regional. 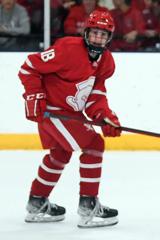