Former Red Knight captain James Callahan ('21) has announced his intention to join the Air Force Academy, where he will play hockey for the Cadets beginning in 2023-24.

Current, Callahan is the captain of the Springfield Jr. Blues of the North American Hockey League. He scored seven goals and 23 points in 59 games, as was plus-12, in his rookie season and currently has a goal in nine games while registering 20 shots on goal.

A four-year letter winner for the Red Knights, Callahan racked up 11 goals and 66 points in 103 career games. He led the in ice time at 26:28 as a junior when he served as an assistant team captain, and averaged more than 25 minutes per game his last two season.

He will be the second Red Knight to play for the Air Force Academy, joining Stephen Carew ('07) as BSM alums who will have played for the Cadets. 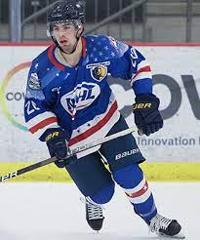 James Callahan is in his second season with the Springfield Jr. Blues of the North American Hockey League.