Will Nelson scored a pair of third-period goals in the tournament opener, Brett Patterson scored twice in the semifinal but the offense drive up in the championship game of the Schwan Cup Silver Division at Benilde-St. Margaret's took second place for the second year in a row.

The Red Knights began tournament play Monday, at Aldrich Arena, facing Burnsville and the Blaze took a 4-2 lead into the third period before BSM came from behind.

First-period goals by Pat Cron and Bryan Glynn gave the Red Knights a 2-1 lead after one period but goals by Zack King, 54 seconds apart, late in the second period enabled Burnsville to overcome that deficit and take a two-goal through two periods.

Nelson scored 3:08 into the final period of regulation play and then tied the score with a power-play tally with 3:21 remaining.

BSM finished the come-from-behind win as Pat Steinhauser found Christian Horn with a pass in the neutral and the freshman right wing broke into the Blaze zone, cut to the net in the right faceoff circle and scored at 2:02 of the extra session.

“I didn’t like the way we played at all in the first two periods," Red Knight coach Ken Pauly said as his team gave up six power-play chances and two power goals in the game's first 34 minutes.

"We simply have to get more honest in all three zones of play," he added. "But the team didn’t quit and played with a lot of fire in the third period. The comeback help us to avoid a quick trip to the loser’s bracket."

Tuesday's semifinal 4-1 semifinal win over Cretin-Derham Hall was highlighted by Patterson's two goals, the second of which sealed the victory with 15 seconds to play, but others played key roles as well.

Pat Borer scored to open the third period, giving BSM a 2-0 lead, and he added two assists in the game. Meanwhile, Jacob Meyers stopped 24 of the 25 shots he faced, keeping the Raiders off the scoreboard until 2:11 remained in the game.

"Jacob Meyers was dialed in," Pauly said after the game. "It was too bad that we couldn’t preserve the shutout for him. He was sluggish against Burnsville but he had been off from real game competition for over a week."

Meyers was on his game in the finale against Wayzata at the Xcel Energy Center but the Trojans' Ty Simcoe matched him save for save.

The two netminders kept the game scoreless through 45 minutes but Wayzata's Kevin Blackley collected a loose puck along the left-wing boards, walked into the faceoff circle and beat Meyers low with 5:46 remaining to break the ice.

Less than three minutes later Billy Soule scored a power-play goal to clinch the win for the Trojans.

BSM will play its fourth game in a six-day span Saturday as it hosts Irondale in a North Suburban Conference game. Game time at the SLP Rec Center is scheduled for 2:30 p.m. 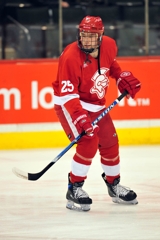