A four-goal first-period got things going for the Red Knights. Blessing scored four minutes, 19 seconds into the game and John Kernan scored less than two minutes later as Spellmire helped set up both goals.

Alex Brask and Chris Flood also scored before the end of the period to send the game into the first intermission with the hosts leading, 4-0.

The score stayed that way until just 1:16 remained in the second period. Kernan scored on the power-play for the only goal of the middle stanza for a 5-0 lead.

The Panthers got their only goal of the game just 11 seconds into the final period when A.J. Fossen scored on the power play but Blessing answered that with an unassisted short-handed tally less than three minutes later.

Evan Peterson's goal at 4:58 of the third period put the game into running time and Spellmire and Flood added goals to round out the scoring.

BSM returns to action for a non-conference, Saturday, Jan. 10, when they take on Minnetonka at the Pagel Activity Center beginning at 5 p.m. 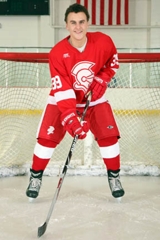