Will Nelson blocked a shot near the BSM blue line which started a rush for the hosts. Bryan Glynn carried the puck up the right side and his pass along the goal line found Patterson, who tucked the puck inside the right post seven minutes, 17 seconds into the contest.

It was the only goal the Red Knights would get in the first period and, with 53 seconds remaining in the opening session, Josh Bevers took a long pass up the left boards from Max Corrigan and tied the score with a shot from the left faceoff circle.

Despite a 21-1 advantage in shots on goal during the second period, it took the hosts over 11 minutes before they retook the lead when Glynn carried the puck behind the Spring Lake Park net and found Patterson in the slot, and he buried the puck for his eighth goal of the season.

It was just over two minutes later when the Red Knights scored on the power play to take a 3-1 lead.

The Panthers dumped the puck into the BSM zone where Jacob Meyers grabbed the puck and passed it up the left boards. Patterson tipped the pass to Horn, who dropped it back to Patterson at the top of the left circle in the Spring Lake Park zone. Patrick Duda then tipped in Patterson's goal-mouth pass.

Just 16 seconds later, John Duda finished the scoring when he took a Dan Kuenzi pass in the slot and scored his third goal of the season.

The Red Knights failed to extend their lead in the third period despite outshooting their guest, 25-2, in the final 17 minutes. Mike Nelson stopped everything BSM could throw at him and the Panther netminder finished with 48 saves.

Benilde-St. Margaret's begins a stretch of four consecutive non-conference against ranked opponents Saturday, Jan. 10, when the 13th-ranked Red Knights take on ninth-ranked Minnetonka at 7 p.m. at the Pagel Activity Center. 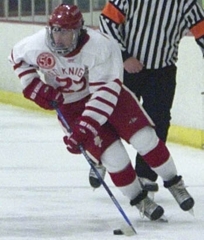