Despite its top line being held without a point for the first time in 11 games, Benilde-St. Margaret's got offensive production from its other three lines as the Red Knights defeated Chisago Lakes, 7-1.

The Wildcats came out energized and a sluggish start by BSM made the play of goalie Rob Ankeny key early in the game.

"This is the second year that we really haven’t played our best game in this building," Red Knight mentor Ken Pauly said. "Chisago played us tough and we were fortunate that Rob Ankeny was on top of his game in the first period. He made some key saves or the first period could have been pretty ugly."

After surviving the early part of the game, the Red Knights got on the scoreboard first when Dan Pemberton skated into the Chisago Lakes zone and his shot from the top of the slot deflected off the glove of Wildcat goalie Kyle Buchanan and into the net at nine minutes, 52 seconds into the contest.

It was less than three minutes later when John Duda's hit along the right-wing boards got the puck to Christian Horn, who skated to the net and found room on the short side to give BSM a two-goal lead.

The Red Knights took more than nine minutes into the second period to get on the scoreboard again but, once they did, the pumped home four goals in five minutes to take command.

Patrick Duda started the four-goal run when he took a pass from his brother, John, in the left circle. He failed to score on his first shot but got his own rebound in the middle of the slot and buried his second chance.

The fourth goal came off a Pemberton faceoff win in the left circle. Pat Cron quickly moved the puck to Sam Anderson, at the left point, and his shot was tipped in by David Tranvik.

The next goal came off the stick of Ben Sauer, who converted his own rebound to give him his first career goal and Pauly said it gave his team a lift.

"The bench was pretty pumped up when Ben scored," he said. "Ben kills penalties and gives us some physical shifts when we need it. It’s awesome to see a great team guy get rewarded."

The four-goal outburst concluded when Horn tipped a Patrick Daly shot with 2:55 remaining in the middle frame.

Jst 47 seconds later, Matt Stamos scored his first career goal for the hosts to end Ankeny's shutout bid and, despite a 21-4 shots on goal advantage in the final period, the Red Knights needed more than 17 minutes to get their final goal John Duda knocked home a Sam Anderson rebound.

"John Duda looks re-energized at wing," Pauly said. "His energy up front was one of today’s big bright spots. It’s doubtful that he’ll return to center when Pat Steinhauser comes back from his injury. John is just too valuable at wing."

With two conference games coming up at home this week, Pauly is looking forward the opportunity his team has to wrap up its fourth consecutive conference title.

"We have a huge week coming up," he said. "St Francis comes in here for a four-point game, led by the state’s leading scorer (Joey Benik) and Totino-Grace comes in on Thursday.

"We have the opportunity to wrap up the conference title and that’s where we will keep our focus for now."

Tuesday's game with St. Francis is scheduled for a 7 p.m. start at the St. Louis Park Rec Center. 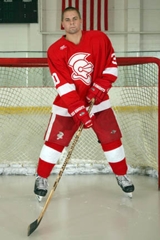