Flood's performance made him just one of 11 Red Knights to record multiple-point games, including goalie Adam Clark, who also recorded his fifth shutout of the season.

BSM held a 45-6 advantage in shots on goal in the game and scored six goals in each of the first two periods, including three goals in a 59-second span of the first period by Joe Anderson, Jeff Spellmire and Evan Peterson.

Anderson had five points on the night, including four assists while Spellmire also recorded a hat trick and added an assist while John Kernan, with a goal and three assists, and Oliver Shields-Nordess, with two goals and two assists, also turned in four-point efforts.

The Red Knights are home again Thursday when they host Totino-Grace beginning at 5 p.m. 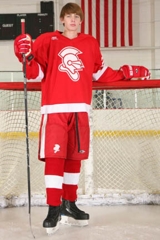