For the second game in a row, Benilde-St. Margaret's found itself down two goals after one period and, despite a third-period rally, could not come from behind in a 3-1 loss to Holy Angels.

The Red Knights had not suffered back-to-back losses since Dec. 2-5, 2006, before falling to Totino-Grace, 5-0 and then the Stars.

"Tonight, Holy Angels was just the better team," BSM head coach Ken Pauly said. "They beat us to loose pucks and were quicker than us.

"We didn’t combat that with a good passing game so we spent a lot of time chasing their speedy forwards."

The Stars' first two goals came in a span of just over two minutes in the opening period as Garrett Faust scored his second goal of the season, nine minutes, 25 seconds into the game, with John Haeg notching his 23rd tally of the season.

Heading into the second intermission, the hosts had a 29-19 advantage in shots on goal to go with their three-goal lead, which could have more were it not for the play of Red Knight goalie Jacob Meyers.

"You have to give Jacob credit for holding us in there through the second period," Pauly said. "He gave us some hope tonight."

Ryan Reilly extended the lead to 3-0 just over five minutes into the third period when he scored from the middle of the slot after taking a pass from Danny Mattson, who helped set up all three goals to give him 40 assists for the 2008-09 campaign.

BSM outshot Holy Angels, 10-6, in the final period but Stars goalie Tommy Burke was up to the challenge, maintaining his shutout bid into the game's final two minutes.

The Red Knights got their third power-play chance of the game with 3:12 to play and finally got on the scoreboard 49 seconds later when Pat Borer came across the slot with the puck and beat Burke from the edge of the right faceoff circle.

"As always, our guys didn’t quit," Pauly said. "I like the fact that we broke the shutout and were still looking to narrow the gap at the game’s end."

Pauly admitted suffering back-to-back losses for the first time in over two years has been tough but knows his team, heading into the final week of the regular season, still has to take care of some business.

"This has been a bad week for us," he said. "We lost two players to injury and we didn’t have one solid day of practice where everyone one was there. It showed in the results.

"Now we need to focus on securing the conference title and getting our program to the 20-win mark this week. That will do a lot to build some momentum going into the playoffs."

The final week of the season features the team's home finale, Senior Night, on Tuesday, Feb. 17, when the Red Knights host Chisago Lakes at 7 p.m.BSM closes out the regular-season at Robbinsdale Cooper, Thursday. 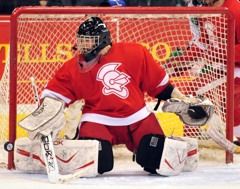